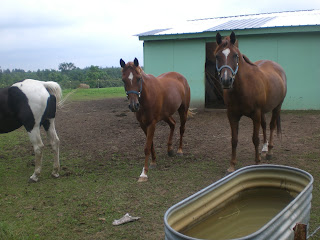 I got a tremendous deal on these two horses. The one on the left is a 'Morab' (his breeding is Morgan and Arabian), named Dante. He is either a genius, or he's retarded. I'll have to train him. He is 7 years old and should have been trained long ago. He's very hyper-active but intelligent. Handling as many different horses as I do daily I have come to be able to spot intelligence, versus just shear, raw nervous energy. He appears to have given up the later. Or else he's an injury just waiting to happen. We'll see. His brother next to him (and below), is a very sure-footed, powerful and smart horse, also a 'Morab', whose name is now Cappucino. Very well broke and appreciates people. I got them and one other for a song; the other I had to give to a friend who had once given me a very good horse.
I passed the pre-entrance exam for the nursing program at Nicolet College two weeks ago with a nice, confidence building percentile so I'm off and getting a head start on Anatomy and Physiology for the next semester as well as back to studying German; gardening, butchering chickens again, starting to process firewood, and by far and foremost, continuing to pour over and marvel at the things God revealed to us concerning His administration of things here on earth, ages past, and ages to come.
* * * * * * 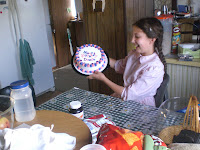 Summers around our place - a particularly intense time for the very physically demanding vocation of horseshoeing - is punctuated with our birthdays and much gorging on DQ ice cream cake, enjoying the flowers in full bloom, and beating those hot summer evening in the house by putting on our fins and masks/snorkels and paddling our kickboards out into the middle of the lake and watching the sun disappear off the tops of the tall clouds.
The seasoning process is going very well! It takes time, hard work in this life to season, ripen. It's not an easy thing with all of the distractions in this world to become built up together with Him - and others - who have seen, rejoice in His presence, and set their eyes on things from above. 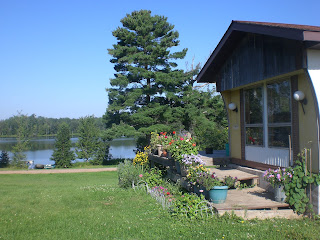