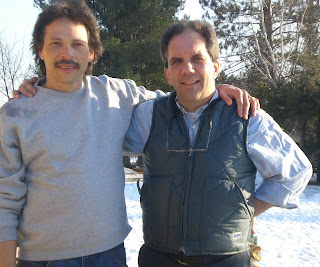 Last Night I Talked to a Man.

Last night I talked to a man who said he's been waiting his whole life for me to call. He had one simple question, the answer to which everyone around him knew but would not tell him. A question not many of us have. Why did he not have the name of his father on his birth certificate? The name all of his brothers and sisters had? Who was his father?

When I told him who I was he didn't know how he could ever even thank me enough. That he's been waiting his whole life to hear someone tell him the truth in this regard.

Does he have any idea of the initiating I have stored up for a younger brother?

I talked to him for three hours last night. I'll meet him, finally, this Saturday. He's coming right up from downstate.
Posted by Todd Saunders at 4:47 PM No comments:

Hey, How About That . . a Half Brother.(Let me put that a little differently)

What does that mean?

I'm not sure what that means to me. I've always had a brother. A sister. I know who my father is, always have, and I even grew up with him; all the way until I was 13. I don't think it ever even dawned on him, when the time came that he had to go, to have a regular visitation schedule with me once he left. I know it didn't to me. I was only puzzled as to why my mother hadn't asked him to go sooner. The marriage just never did work. I wrote him a letter soon after he left asking him not to go, stand up to mom, not to give up on the family. But he wrote back and said that my mother's mind was made up, and that it was probably for the better. I silently agreed with him, but, poooofff!!!, there went the family. I wanted to have it both ways.

I thought it was a no-brainer; the family had been dead in the water for years; I thought this was just meant to be. There was even a sense of relief. I just didn't want to let anybody off the hook! What do you mean failure? Come here Dad, I thought, . . . you're a Dad. . . don't you know that there is no room in my vocabulary for a failed Dad of mine?

Our Pastor counseled my mother and father that he could not see any point in their staying together. One would hope a Pastor would put up a little more of a fight than that. But it was over. And to me it was none too soon. But yet, perhaps a little bit too...

But there was something I didn't know; that my Dad had had an infidelity with his cousins wife, which had resulted in the birth of a baby boy. My mother got the hospital bill in the mail from the boy's mother the following year.

I guess I'm glad not knowing how I would have handled that bit of information at that time in my life.

So a divorce ensued and my Dad went on to achieve, by any gracious standard, even lesser things in life. But he tried to stay close to the family for a while and deserves credit for doing the best that he was able.

But back to the boy, Robert, who is no longer a boy but a young man in his mid forties.

I found out about him 3-4 years ago in a conversation with my mother. I was immediately upended by the thought that, "What if he were wondering who I was?". I certainly did wonder about him.

Last week there was the death of his uncle, my second cousin. Through a series of unlikely events the announcement of that fact wound up in my email box. I googled the obituary and found all the names and locations of the people I'd been unable to locate the past year. Two phone calls and one email later and I connected up with an Uncle Bill who was glad to help by contacting Robert's mother and locating Robert.

So what does this mean? To him?

Am I sort of an unsolicited nusaince?

Do I need this? I'm 50 years old. Is it not a little late to find out about a half sibling?

Does it even matter to him?

It would to me.

Does he know who his father is?

I assume he does.

Has he met him? I'll just figure he has.

If the young man has met his father(my father), then I know what the young man went away from that meeting with, and I know it wasn't much. I know the father did not need or even know what to do with another son. I know that. And I'll assume the son has accepted that and has dealt with it. And that's what brings us here to this intriguing question.

Let's face it. . . some people are not introspective; and if you're not really sure what I mean when I say that, or even question whether or not you even need to be introspective, then you are probably not.

It means that if I were in his shoes then, would I appreciate knowing that there is still a healthy natural family instinct in some who want to reach out and make sure that their own are o.k.; because it is healthy, and it is good, and you've got to because no one else will.

It means if there are some blanks he still needs filled in about the rest of his chemistry, his genetics, his lineage, his kin, that, I've got some of the answers he has to have.

It means, if he needs it, he's got an open book about his natural father.

And that's important. It means if he has a curiosity about these things he has somewhere to take it.

If it were me, that would be a big one folks. A real big one.

And, all I need to know now is that he's o.k.; wherever this world has taken him.

But not until I know.