It's that time of year again when I go half an hour north to Minoqua each Monday night and participate in a seven week rehearsal as a member of a 140 person choir which they call the Northwoods Hymn Festival Choir. This is it's sixth year and my third year of being involved in it. It's a powerful musical experience for me as well as a challenging one.

Hark, I Hear the Harps Eternal was a new song to me last year and musically left a nice impression on me. You can't quite capture the huge sound these 140 people make on your average computer speaker, but maybe it will come close.


Hark, I Hear the Harps Eternal.

We had a guest composer/conductor of some renown from out east named Gilbert Martin who was commissioned to write a piece to celebrate the 5th anniversary and wrote for us Laudate Dominum.


I just bought four of the last few cds. they had left of The Gift of Alleluia, 2006 Northwoods Hymn Festival, to give to friends, so I don't think they'll mind if I post some songs here. 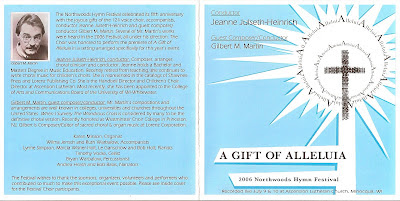 Take My Life and Let It Be.

Here is a hymn I've been working on in a style that is beginning to come together. I thought I'd post it here, on the page with the others, for the distraction and entertainment of a few other of you hymn lovers. Hope you enjoy it.